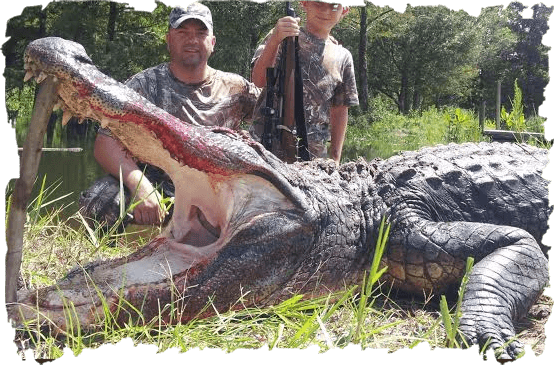 Hunting has been a leisure activity for many people. With the extreme adrenaline you feel while strolling down the darkness of a wild forest or hunting grounds, it is not a shock that those who have tried it once will surely come back to catch more. However, have you ever heard of hunting a species in its own water habitat? It may sound a little scarier compared to having the power to run on the earth with your own feet rather than succumb to the dangers of hunting in the water. If you want to take your hunting skills and experiences to the next level, surely, Alligator hunting is a must-try for you.

Not only should you be able to run fast on your own two feet but you should be able to have fast reflexes so an animal as big as an Alligator cannot turn the table and hunt you instead. There was once a man whose name made it to the news fast and wild when he was able to capture and kill a wild gator roaming in a neighbourly lake. Clark Woodsby is the renowned name. With an electronic call, this tough-and lucky-man was able to lure the massive gator and trap him in a game of Alligator hunting.

Luring the Alligator may be an easy task. For sure, this monstrous carnivore is willing to come at you and feed on whatever his teeth can sink into. However, ending the game of hunt is the challenge. With a crossbow, Woodsby was able to shoot the gator in its shoulder and pin him down to death.

However, this tough hunter did not go it alone. With Glen Grizzaffe, the owner of a local gator processing facility who also happens to be a licensed trapper, as his strategic ally Woodsby was able to capture the town’s monstrous nuisance. The licensed trapper was called by Woodsby to take care of his good catch. Monster-that was how it was described by Woodsby himself. Not to mention that it had lost a total of 4 inches of its tail in a fight, the monster stood tall at 12 feet and 10 inches. Woodsby is confident with his catch, and surely, people who also live in the area were able to release a deep sigh of relief as they can again use the lake for leisure purposes.

Now, the question for many is how Woodsby was really able to defeat the king of the lake? The exciting news is, the Alligator hunting did not end with the click of the crossbow. The gator was moved to a boat where it put up a great fight. Aside from the bare hands of these hunters, the fight ended when Woodsby took his opportune time and laid two close-range shots from a .45 caliber pistol to the gator.

Are you too up for a more exciting challenge? Explore the depths of Florida Extreme Hunting. It feels like a real life duel to the death with a monster as you hunt a 12-foot gator. Osceola and Alligator hunting stand out among the rest. Hunting is not something to be put in the hands of those who are not expert in the game. With outdoor activities, you will not only capture a monster but also earn that once in a lifetime experience. Want to learn more? Call us now 239-243-9663 to wrestle your gator!

“I can honestly say that the professionalism and family atmosphere that they bring to every hunt is unmatched, and I will be recommending them to anyone interested in a real Florida hog hunting experience.”